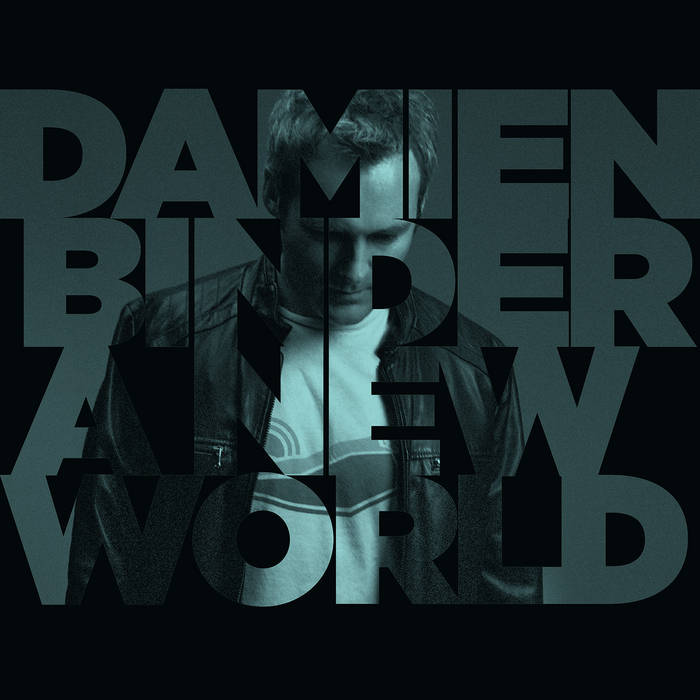 ‘A NEW WORLD’ IS THE NEW ALBUM FROM ACCOMPLISHED SYDNEY-BASED SINGER/SONGWRITER DAMIEN BINDER.

This album, Binder’s fourth long-player, showcases his effortless ability to swing from soulful hymn-like ballads to moody rock and country-tinged numbers. The ten new songs find him in an expectant and buoyant frame of mind with meditations on destiny hope and rejuvenation. The chiming melodic guitars, combined with Binder’s compelling voice and lyrics, make for a dynamic and stirring collection of tunes.

Binder says of the sessions: “Working on this album with the aforementioned group has been a privilege and a blast. There have been many inspiring moments from beginning to end - what you always hope for in the studio! Personally, it’s always been about having strong songs and the ten here are some meaningful ones to me - I hope that comes across”.

ABOUT DAMIEN BINDER
Singer-songwriter Damien Binder has been writing and recording his original style of moody alt-rock for the last ten years.

Since his self-titled debut album in 2000, Damien has gone on to perform both nationally and internationally while also supporting some of the world’s leading acts. He has played at the SxSW festival in Austin Texas, World Series showcase in Auckland and supported the likes of David Gray, Marianne Faithfull and Ani De Franco. His music has also been featured on numerous compilation albums.

Damien has previously been a finalist in the prestigious NZ APRA Silver Scroll Award for Songwriting. He was also a finalist in both the 2005 & 2016 International Song Writing Competitions as well as the 2015 Unsigned Only Music Competition. To this day Damien’s music is regularly featured on the soundtrack for long running popular NZ TV Series ‘Shortland Street’.

Damien’s brand of thoughtful, melodic songwriting has drawn much praise and comparison from reviewers.

Press Reviews for 'A New World'

"This is the Sydney artist's fourth solo album since his first in 2000 and the years of experience clearly show. Binder takes a measured approach to his songwriting, something particularly evident in the way most of his choruses are constructed. Rather than being the main focus of his songs, where the rest is little more than a build-up (by using pauses for added drama and the like), his tunes seem to just slide into them. Typical is the slow building Evergreen, which seems to circle round beautifully to the refrain. His songs are no less catchy for it; the subtlety slips them into your subconscious rather than being whacked over the head. His vocal also has an everyday-man quality about it, without appearing forced and, as such, it nestles perfectly into his music. It also suits the "tell it how it is" themes of his songs which are largely based around hope and devotion, with lines such as: "Give it time … and don't give up" in the rattling pop of It's You I Came Back For. Highlight is album closer Way Gone, with its controlled pace perfectly conveying the song's emotion. This is a collection of little gems."
★★★½ -Paul Smith - Sydney Morning Herald August 18 2016


“Damien Binder is one of those smart songwriters because he walks a pleasing line between the singer-songwriter genre and a smattering of power pop. He writes songs which in a better world would find themselves all over radio. As always Binder delivers thoughtful pop with touches of guitar jangle (Breaking Beyond Me) and some downbeat ballads (the lovely Ships Sail Out), all of which are sensibly and sensitively arranged to keep him front’n’centre. If nothing immediately leaps out, open ears at radio would pick up It’s You I Came Back For and the Eighties pop gestures of Over.”
- Graham Reid - elsewhere.co.nz


"Reigniting the candle of '80s jangle-pop is New Zealand-born songwriter Damien Binder. Binder's A New World takes classic indie-acoustic styles of old and blends them with a hefty dose of Britpop flair. The album parallels such bands as The Go-Betweens and The Church, but also branches out with stylistic nods to the likes of Jarvis Cocker and Ron Sexsmith. A New World features a thematic recurrence to rekindling lost relationships, the album progresses beautifully to final track, Way Gone - a sensational closer."
★★★½ - Joe Dolan - The Music.com.au - April 2016

"On A New World Binder looks to ’80s English jangle-pop and Aussie indie for his template. Parallels with Commotions, The Go-Betweens, The Church and The Triffids are obvious, especially on the title track. There’s also a little self-deprecation in there, a true Kiwi trait – “I used to be less cynical….will my love go round, I drift through empty towns”. Breaking Beyond Me starts off with a familiar Lloyd Cole intro but finds its way towards classic DD Smash, with a great commercial hook in the chorus."
- Tim Gruar - the13thfloor.co.nz

"Australia’s Damien Binder is today’s second artist in the spotlight from down under. He fits in well here at Pure Pop Radio, seeing as how his album is co-produced by Michael Carpenter and features Kylie Whitney on backing vocals. Binder’s vocals are strong and expressive, and the playing is exquisite. There is a Byrds-ian edge to “A New World” and “Breaking Beyond Me” (and there you have today’s second Byrds reference); “I Won’t Let You Down Again” has an Abbey Road-period Lennon quality about it; and “What You Call Your Own” is an upbeat pop song with a country sheen."
- Cait Bennan - purepopradio.com
May 10 2017

"If Dave Dobbyn was just starting out today, would he have the same impact? Would he garner the same airplay?
I ask because that is the sound of Binder’s A New World. Relaxed rock with a hint of country, notably present on the track Evergreen. Gone is the dark grungy defiance from the days of Second Child, but that is expected, as I imagine a lot of the band and fans’ adolescent angst has dissipated over the past twenty years.
What remains when all the anger is gone is a collection of musing observational and reflective pieces with lyrics of love and life laced with the cynical remnants of a bygone rebel, an evolution that comes with maturity and open eyes. There’s an appeal in that to me, more than there is in bunting, fighting, excessive drinking and made up words.
Perhaps it’s the generation gap, it could be I’m at the age of self-reflection and reminiscence. Maybe I’m just one of those old people, out of touch with the modern world, whose opinion counts for naught. Whatever the case, if it was up to me, there would be more music like A New World in the world today."
- Petros - muzic.net.nz


"There is nothing like a great singer songwriter whether that be Neil Finn, Michael Penn, DonMcGlashan, Matthew Sweet, Jason Falkner or Ian McNabb. You can add Damien Binder to that list.
The Sydney based Singer Songwriter offers up his fourth album and the ten laid back jangly songs are a fine listen. I don't no what's in the antipodean water that allows them to master these sort of albums. Great catchy songs that just ease your mind. The album reminds me a lot of Bryan Estepa and Don McGlashan, yet there are parts that sound a bit Pete Yorn.
The involvement of Michael Carpenter, a real ASH favourite certainly aids the sound, although this isn't Carpenter's Power Pop / Alt Country direction. Binder's melancholic voice is aided beautifully by the production and you can spot Wayne Bell's drumming anywhere.
We may talk about chiming guitars most of the time, but every now and then you need a rest from all that riffery and this is just the album to do that."

By Anything Should Happen/I don't hear a single - blogger.com
Monday, 19 September 2016

Serena Cherry debuts her black metal project, plus a Pick from the Crypt block from Svalbard